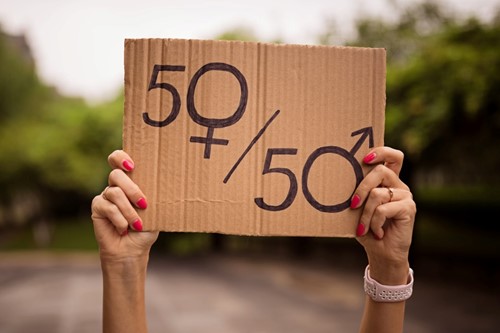 During the past year, there has been a high focus on sexism, sexual harassment and most other inequalities between the genders at the workplace. It is slowly becoming an obvious flaw in our society and measures must be taken to support the ongoing pursuit of equality.

During the past year, there has been a high focus on sexism, sexual harassment and most other inequalities between the genders at the workplace. It is slowly becoming an obvious flaw in our society and measures must be taken to support the ongoing pursuit of equality. This issue is difficult to start executing on, as it is an intangible problem. Addressing gender equality raises questions like, where do you start investigating, what are you looking for and how do you take measures that can improve the cause? In the world of organisations, some members experience having power factors at play, which complicates the focus on gender equality in general. From an Actee point of view, if you experience power in play, you need to start asking questions, if you don’t have any, you need to start asking questions anyway. Gender equality is something we all need to accept as a theme in any given organisation around the world.

We have been doing some research and found a frame, that we hope can be helpful in the future, with the continued work in the field.

The Framework Behind The Game

The ‘European Institute for Gender Equality has made great efforts in addressing this issue, providing a tool that can measure equality in the EU. The tool creates visibility to areas that need improvements which helps policy- and decision-makers design more effective gender equality measures. The framework works great in a game context too.

However, what is truly problematic in this debate is the high level of unconscious bias that is present in all of us. If we do not feel the matters with our own senses, we tend to not notice the issue, and if the solution is to provide a united front, we need all hands on deck in understanding the root causes. Said in other words - you might be perceived as blind if you do not recognize any gender equality issues around you.

The European Institute for Gender Equality currently provides insights as to where to apply focus first, which creates common visibility on the issues and allows for a whole country to focus on the said domain, which is the first step in creating public awareness.

The institute has created six core domains and two additional domains of measure:

The six domains and the elements they each contain will be further dived into below.

“The domain of work measures the extent to which women and men can benefit from equal access to employment and good working conditions.“

There are two sub-domains to work, the first being ‘Participation’ which combine two indicators: the duration of the working life and full-time equivalent employment. This sub-domain takes into account the higher incidence of part-time employment among women and is obtained by comparing each worker’s average number of hours worked, to hours worked by a full-time worker.

The second sub-domain is ‘Gender Segregation and Quality of Work’. Segregation is measured by the number of men and women in different sectors, and the quality of work is measured by flexible work arrangement – which is captured by the ability to take an hour or two off during a workday, to take care of personal matters. - and career prospects – which captures continuity of employment and career advancement prospects.

“The domain of money measures gender inequalities in access to financial resources and women’s and men’s economic situation.”

The second subdomain ‘Economic Resources’ captures the risk of poverty and the income distribution amongst men and women. The indicators included in this domain are the percentage of a population not at risk of poverty. Furthermore, the ratio of the bottom and top quintile by sex is used to measure the level of income inequality among women and among men.

“The domain of knowledge measures gender inequalities in educational attainment, participation in education and training over the life course and gender segregation.”

The first subdomain ’Educational Attainment and Participation’ are measured by two indicators; the percentage of men and women tertiary graduates, and participation in formal and non-formal education and training over a life course.

The second subdomain ’Segregation’ targets gender segregation in tertiary educations, by investigating what percentage of men and women are present in different educational fields.

“The domain of time measures gender inequalities in the allocation of time spent doing care, domestic work and social activities.”

The first subdomain ‘Care Activities’ measures the gender gaps in men and women’s involvement in caring for children and the elderly as well as their involvement in the housework.

The second subdomain ’Social Activities’ explores how many men and women engage in social activities. More concretely it measures men’s and women’s engagement in sport, culture or leisure activities, combined with their engagement in voluntary and charitable activities.

“The domain of power measures gender equality in decision-making positions across the political, economic and social spheres.”

The subdomain ’Political Power’ examines the representation of men and women in national parliaments, government and regional/local assemblies. Gender balance in economic decision-making is measured by the ratio of men and women on corporate boards of the largest nationally registered companies.

The Gender Equality Index also presents data in the sub-domain of social power, which includes data on decision-making in research-funding organisations, media and sports.

Health status looks into the differences in life expectancy of men and women together with self-perceived health and disability-free life expectancy.

This is complemented with a set of health behaviour factors, based on WHO recommendations on healthy behaviour - fruit and vegetable consumption, physical activity, smoking and alcohol consumption.

Access to health services is measured by the percentage of people who report unmet medical and/or dental needs.

If these six gender equality index domains are aiding gender equality on an international level, then what is stopping us from experimenting and applying them on an organizational level? Investigating the balance between genders in all levels of an organisation and looking into patterns of flexible working. Inspecting the financial equality of the employees and their need for training to aid equal career aspects. Maybe re-examining if there is a representation of both genders present in decision-making positions.

We cannot fix what we do not know is broken. By defining six focal domains we are moving more and more away from the intangible, unmanageable issue that is gender inequality, and getting closer to a common mindset for change on the matter. By investigating these six domains you should be able to start seeing patterns and determine if and where aid is needed. This index provides a starting point for any manager or leader to take charge and investigate potential issues.

Finding an issue is not enough, action is needed. But how does one act when the issue at hand is sensitive and almost everyone has an opinion about it? You need something that can start and drive the difficult dialogue, that allows for differences in opinions, but through the learning process creates a common understanding of the issue and a united mindset for change.

Actee is a global provider of digitalized workplace learning, with many years of experience in three areas of organisational development online tools: Change, Communication and Leadership. We will argue that all three elements play a vital role when it comes to handling a sensitive subject as this, so who better to help than the experts?

We have created a gender equality awareness game for organisations to get the discussion started, try it for free here.

Furthermore, you can test the Actee Gender Equality Quiz here.

Read About Our Actee'Vists Measures